Courtesy of unpredictable Etna’s weather, we’d got a chance to visit Taormina.

By 11:00 we were done with first round of mountain hiking and exactly at the same time it started to rain. Prospect of climbing slippery lava rocks with zero visibility looked, ahem, less than exciting but how to spend more than 6 hours of daylight left at our disposal?

That’s how Taormina came into play.

Everybody heard about it. Countless celebrities spent enough time there to be spotted and photographed in front of the picturesque town.

In a bid to show Taormina’s true colors, I decided to leave photos untouched. By now, we all are too familiar with Instagram magic and Photoshop makeovers. But what would happen if Taormina sheds its makeup?

Here it is as we saw it.

Time to visit Taormina, a darling of travel guides

According to Lonely Planet, spectacularly perched on the side of a mountain, Taormina is Sicily’s most popular summer destination, a chic resort town beloved of holidaying high-rollers and visiting celebs. It is also listed on TripAdvisor as a Travelers’ Choice.

Any place with such accolades is bound to become a tourist trap.

Hence, we haven’t planned to visit it simply because there are too many other charming tiny towns and villages in Sicily not mentioned by “big guns” of tourist industry where one can walk without a need to stay in line to snap a photo at some picturesque spot.

However, curiosity, a curse of any true traveler, was wrestling with common sense asking the nagging question.

When is the best time to visit Taormina?

Accidentally, we chose the right time to visit Taormina.

In summer, it becomes so busy that it is literally difficult to walk there.

With the weather getting colder, crowds get thinner and thinner, and from the end of November till April the town virtually shuts down.

According to local wisdom, the best time to visit Taormina is either in April/May or in September/October. Right on cue, we came in late October.

Taormina is a show-off with substance

It was a cloudy afternoon, but nevertheless there was a fair amount of activity along the main street.

I have to admit that our heavy-duty hiking boots looked rather out of place.

The main street, Corso Umberto I, seems like it spends at least an hour every morning in front of a mirror to make sure it looks the best.

Walking there makes you forget about all worries in the world: just shop, eat and admire the scenery.

While Taormina is undoubtedly a show-off, it is also achingly beautiful filled with exquisite medieval buildings, an impressive Greek theater and sweeping views of crystal clear waters of the Gulf of Naxos.

On a clear day, Mount Etna acts as gorgeous and at times ferocious backdrop.

A brief history of Taormina

Founded in the 4th Century BC, Taormina has a typical Sicilian upbringing: Greeks, Romans, Byzantines, Arabs, Normans, the French and the Spanish all came, saw, conquered and sunk into oblivion.

The ancient Theater is arguably the most interesting sight.

It occupies the ridge of the hill overlooking Taormina.

The original plan dates back to 3rd century BC.

However, it was almost completely rebuilt and enlarged by Romans in 2nd century AD. What is visible of the Theater today belongs entirely to that reconstruction.

In modern days, the Theater was a setting for a number of movies including some that might sound familiar to English speakers, i.e. The Light Touch and Mighty Aphrodite.

Some other notable attractions in Taormina:

More photos from our walkabout in Taormina. Enjoy!

In conclusion, our 6 hours in Taormina were well spent but it’s unlikely that we will visit it again anytime soon.

If you prefer off-the-beaten-path ways to explore popular destination, we have some ideas for you: 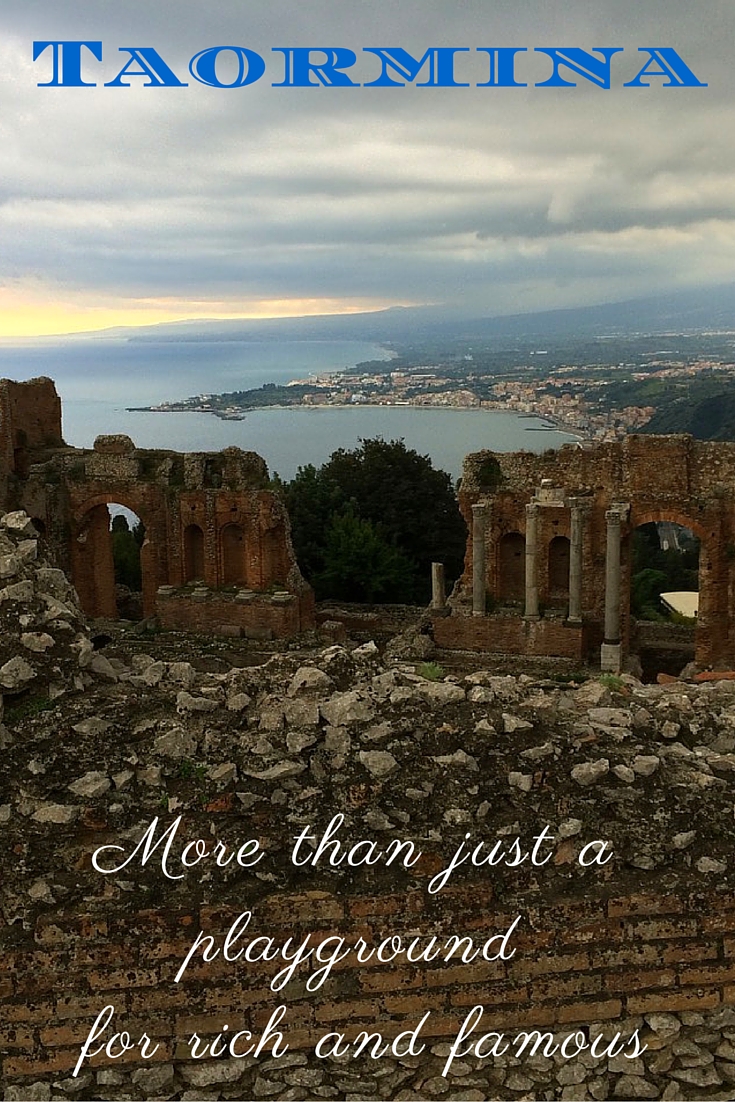 9 thoughts on “Is Taormina just a playground of rich and famous?”