Palermo street art, where are you?

The street art presence in the historical part of Palermo is much more subdued in comparison to Montevideo or Sofia.

At first, our preferred method of discovering new places (get a map, set a destination and immediately get lost somewhere in the bowels of a city), produced miserable results. Street Art of Palermo carefully avoided us. I guess, we got spoiled with vibrant murals of Uruguayan capital or maybe just by accident, everything we saw could be categorized as meh at best.

One day, graffiti gods decided that enough is enough and dumped a treasure trove of Palermo Street Art masterpieces in front of us. Suddenly, walls were filled with a unique art in stark contrast with unimaginative scribbles of prior days.

This mural was not the first one we stumbled upon, but, arguably, it was the most memorable and a worthy representative of Palermo Street Art.

Ema Jons is an Italian artist born in Como. His works are populated by disturbing zoomorphic escapees from some sort of modern bestiary – a strange and unhappy universe of wild imagination.

Currently, he is closely involved with the #borgovecchiofactory project in Palermo, a creative art lab for underprivileged youth of Borgo Vecchio district of Palermo.

Undoubtedly, street art aficionados would recognize a signature on these two stencils.

Christian Guémy (C215, aka France’s answer to Banksy) visited Palermo in February of 2015 as a part of his long journey through France and Italy where he followed the footprints of the artist Caravaggio.

Among other pieces, Christian Guémy left some amazing Caravaggio-inspired stencils throughout the Sicilian capital. Sadly, we came to Palermo too late to see the most of them. In a disgusting turn of events, the majority of his stencils were stolen soon after he left. We were lucky to see the last two pieces.

Although the beautiful art is gone, the short documentary that recorded C215 visiting Palermo outlived his creations. In this video interview, the French artist professes his admiration for Caravaggio, talks about similarities between Caravaggio’s times and today: “A period quite similar to ours, a dark and tragic period of religious fundamentalism and persecution.”

He also talks about what transgression means to different cultures and muses about the indifference of Palermians regarding street art and how little they appreciate the beauty of their city. Such a short interview covers a surprisingly wide range of topics. You wouldn’t regret watching it.

The works of Yuri Romagnoli (aka Hoppn) are easily recognizable and signed with his first name written in Cyrillic: ЮРИЙ. His signature bicycles can’t be missed on the walls of Piazza Caracciolo. 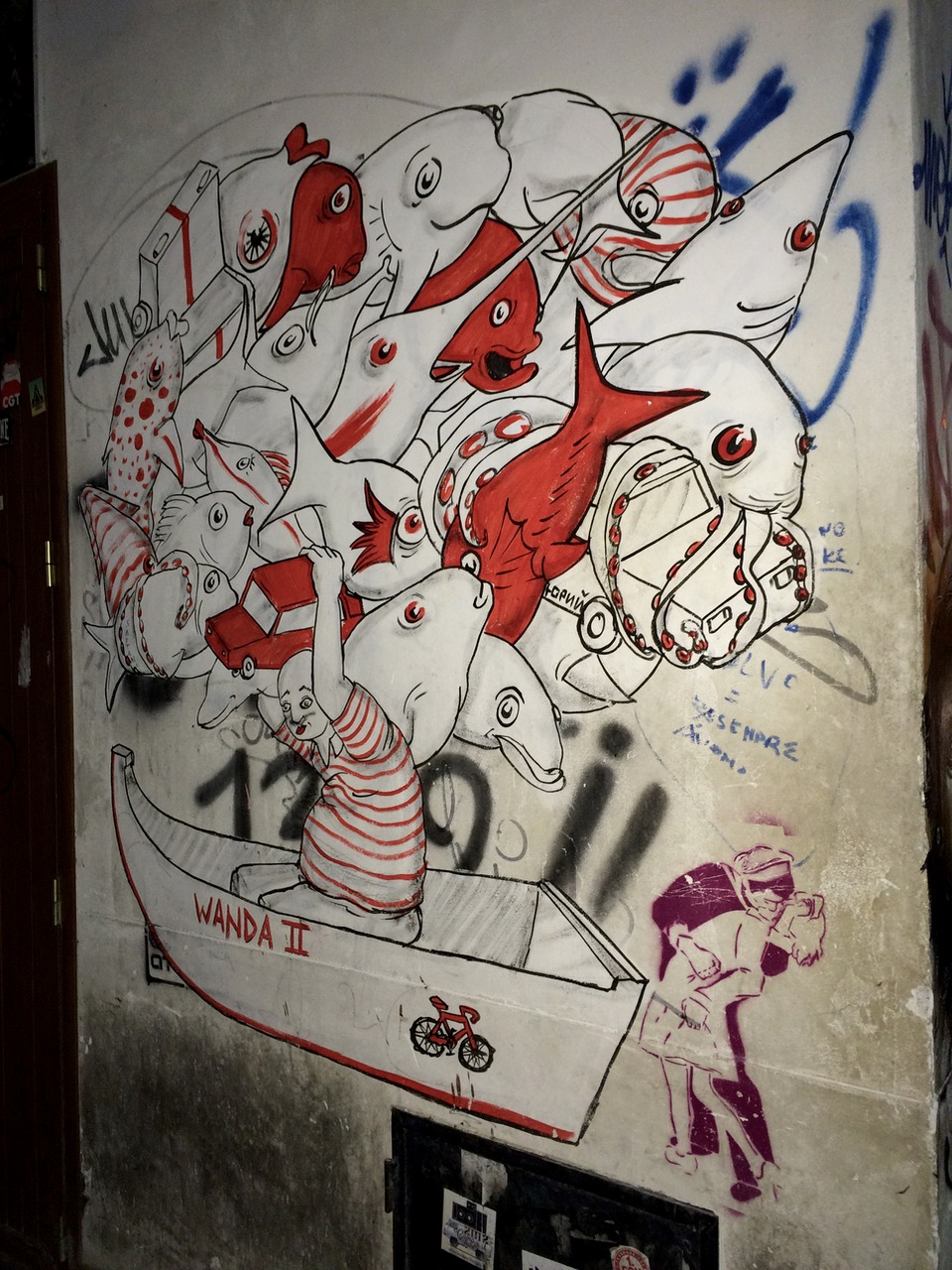 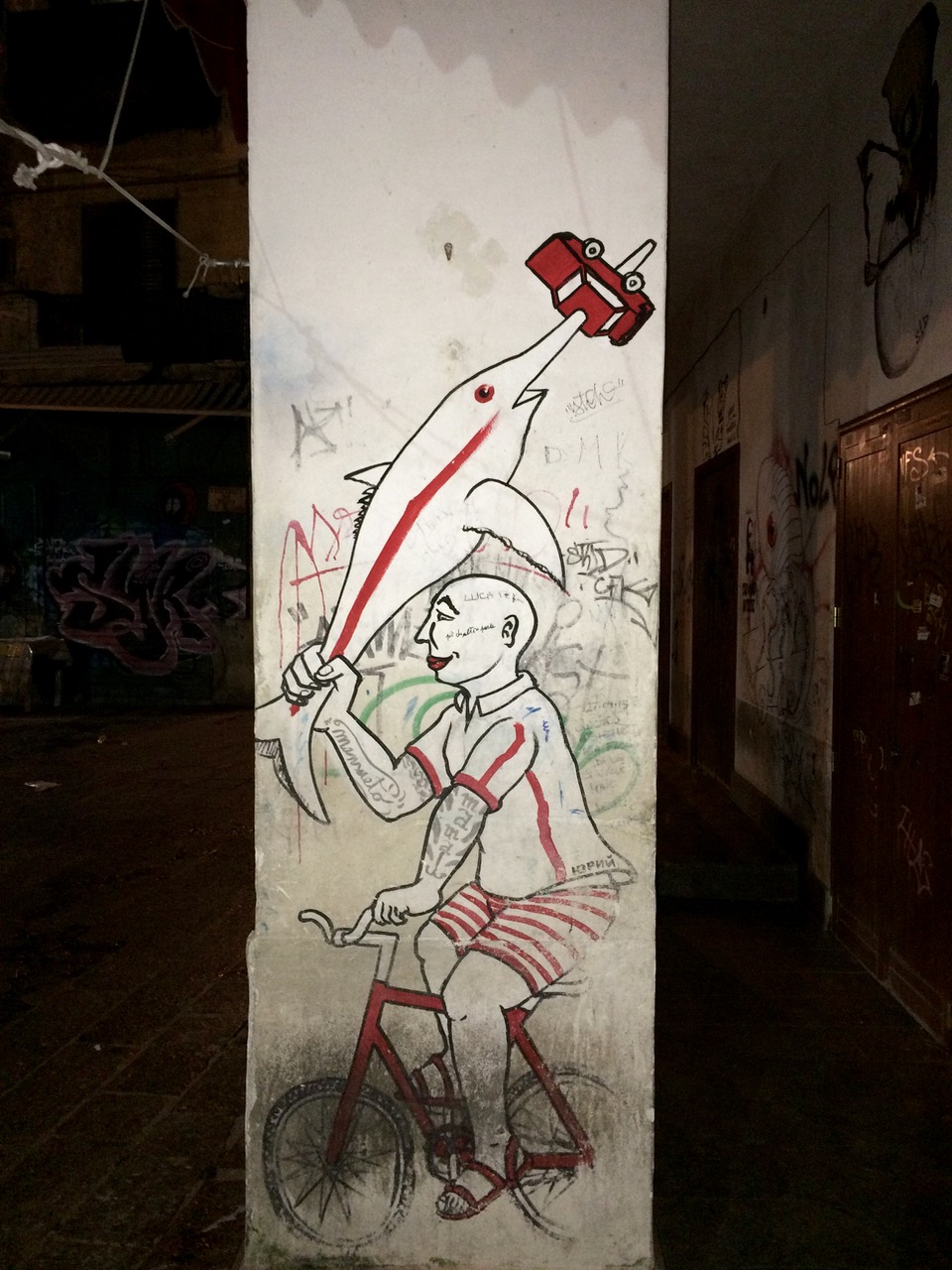 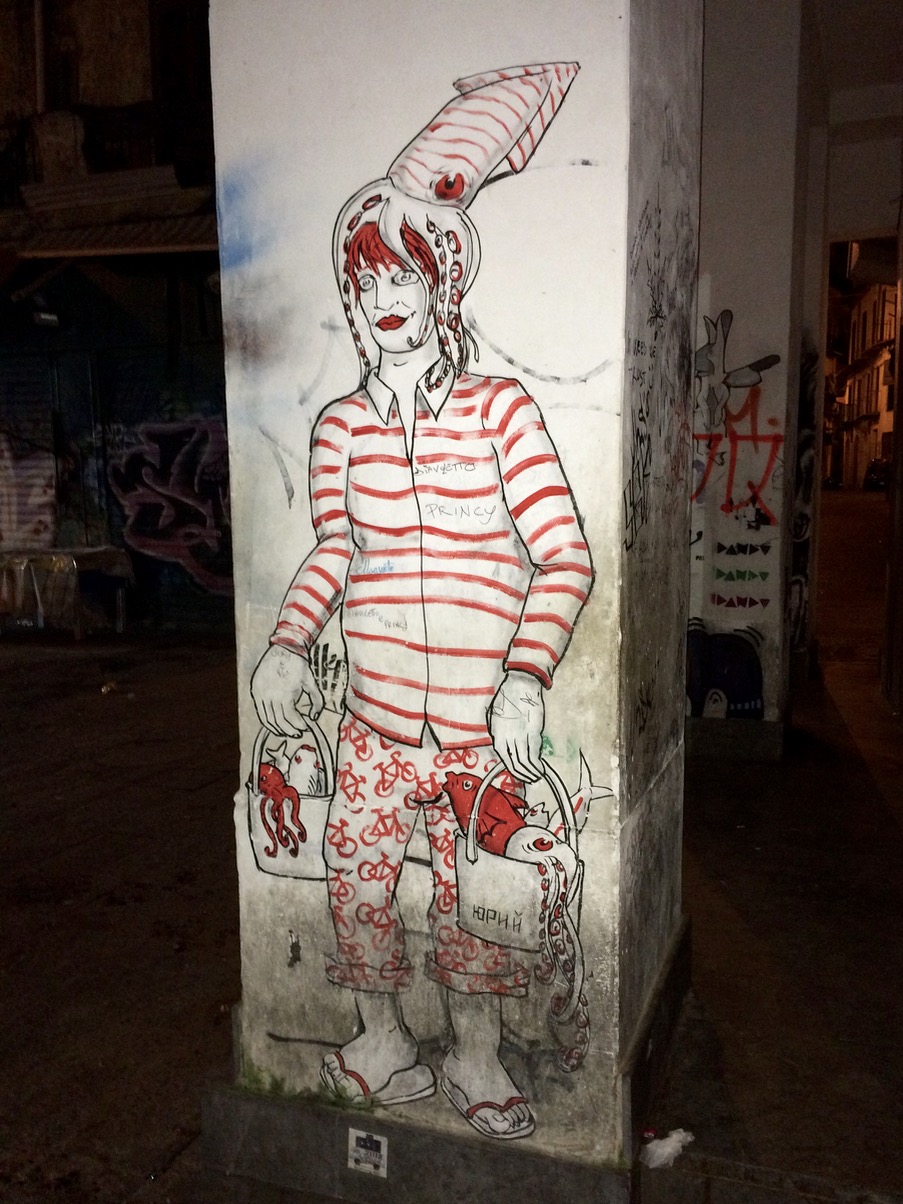 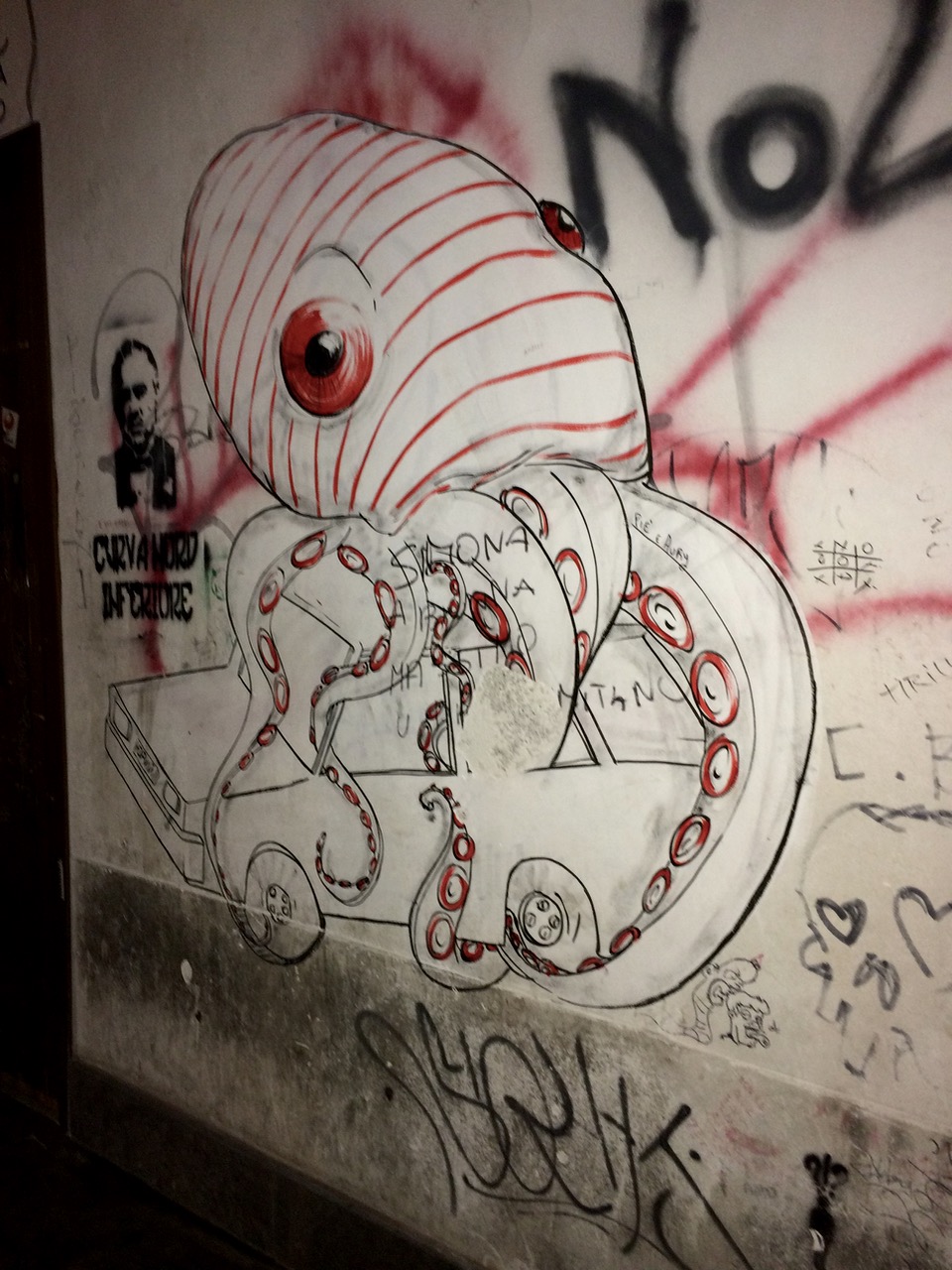 Why bicycles? Read this interview with the artist to find the answer.

In fact, Piazza Caracciolo and nearby streets look more like a street art gallery than just an ordinary city block. Some works are signed and/or easily recognizable while others remain unknown.

The mural’s title, Salvo, has interesting origins. According to the artist: ““Salvo”, which is written on the sides, is the name of a kid that came by when I was painting. I asked him if he liked the piece and he left, when I was finishing he came back and said “Mi piace” I like it.”

Sadly, with nearby construction, the entire mural was impossible to see back in the day. The mural’s title refers to the symbol of the city The Genius of Palermo.

The Genius of Palermo (aka Genio) is one of the city symbols and the laic patron of Palermo. He was the ancient numen and genius loci of the Sicilian capital.

Collettivo FX (Collective FX) was formed in 2010 with the intent to pollute the concrete. The basis of their graffitis is Article 9 of the Italian Constitution: The Republic promotes the development of culture and scientific and technical research. It safeguards the natural landscape and the historical and artistic heritage of the Nation.

Astro Naut is a street artist who began painting in the streets of Madrid in 2008.

Beny Vitale (aka Trebel) is an Italian artist. In his own words: HE LOVES ART.

Belén García Pardo (aka Julieta XLF) is an artist from Spain. Born and educated in Valencia, she primarily focuses on street art since 2004. Her style is heavily influenced by anime and is described as kawaii (cute in Japanese).

A festival of colors carries tiny figures that surround the magnificent image of a girl. Birds arise spontaneously from her hair, dreams of transformation, renewal, evolution required by the world around her. ~ Belén García Pardo

If anyone knows anything about the authors of the pieces below, please leave a comment so that I can give them the proper credit. 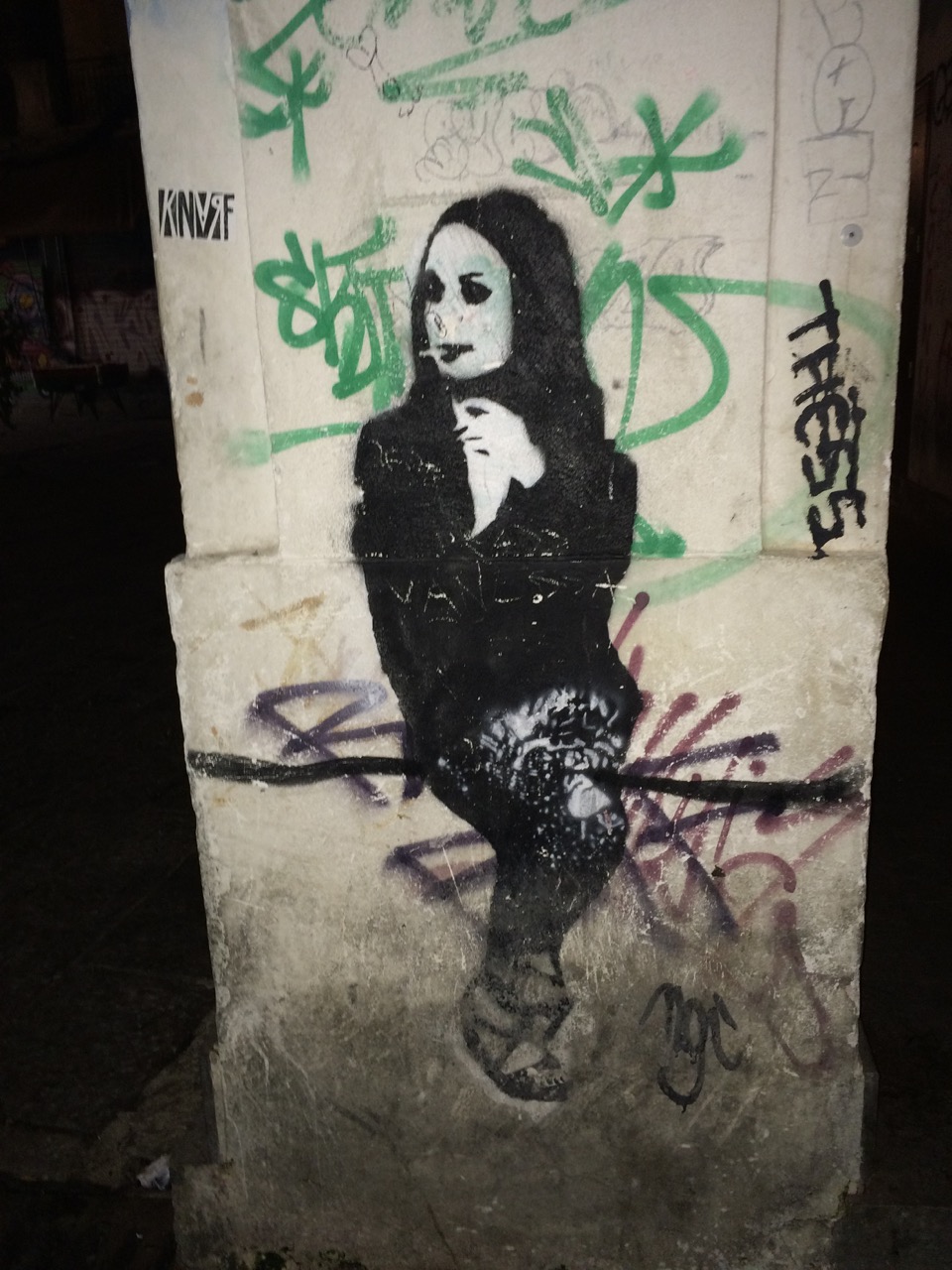 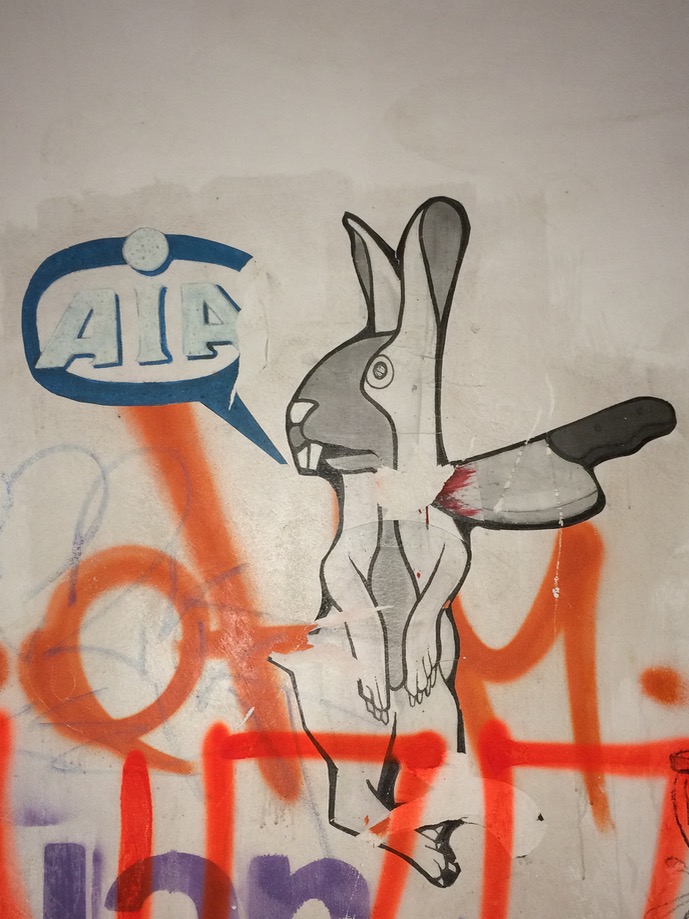 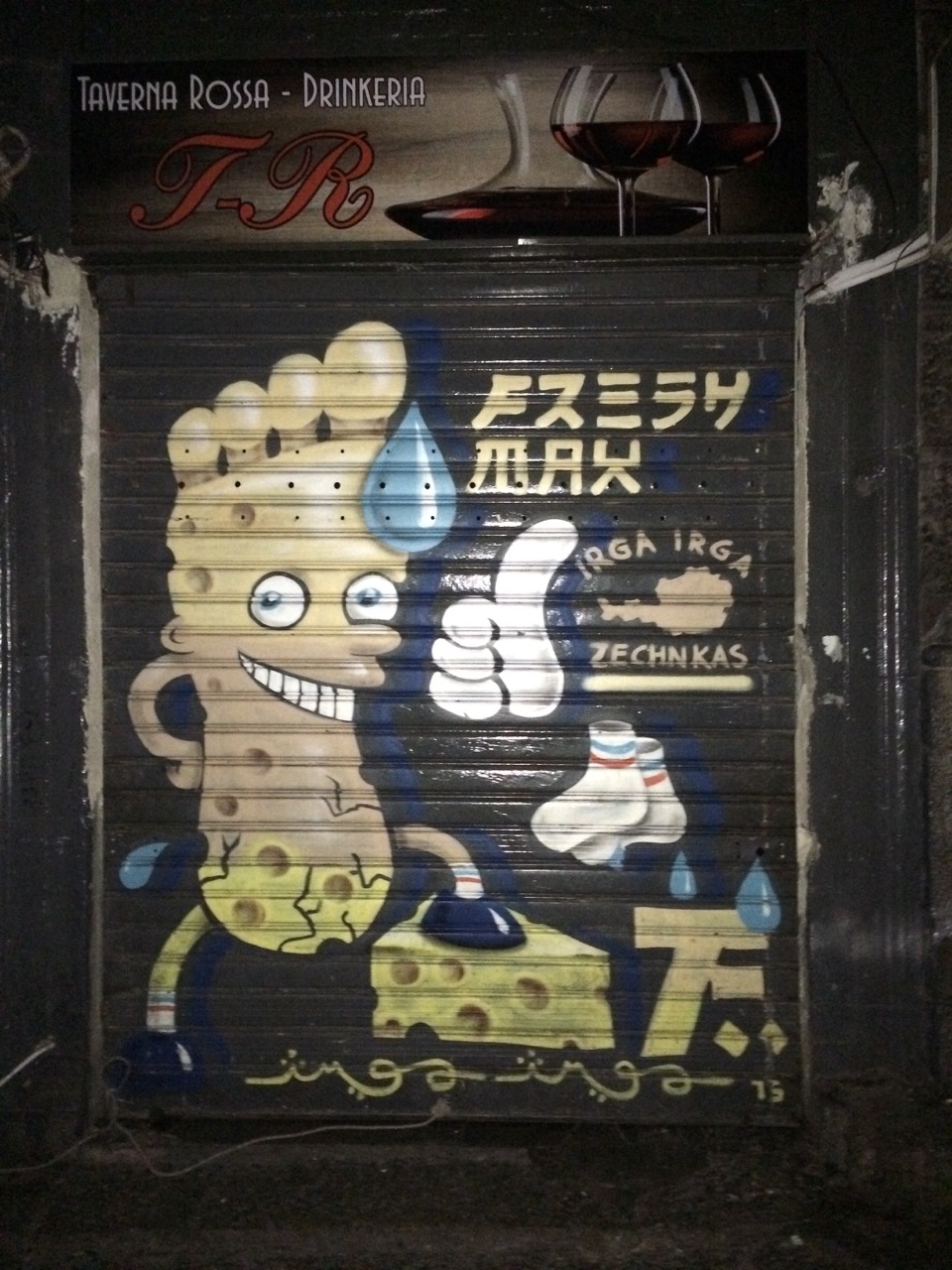 A blast from the past

We found some interesting murals around Piazza Magione.

Walls of Chiesa di Santa Maria Della Sapienza (roughly translated as  Church of St. Mary of wisdom) free-standing in the middle of a square, were the perfect canva for street art masterpieces.

Several artists painted large murals there during Wallpaper09 event that was a part of Palermo Design Week 2009. There are a few of them still visible despite being exposed to harsh Sicilian weather for years.

Sadly, I failed to recognize authors of the rest of the murals.

If anyone knows anything about the authors of the pieces of Palermo Street Art below located at Piazza Magione, please leave a comment so that I can give them the proper credit. 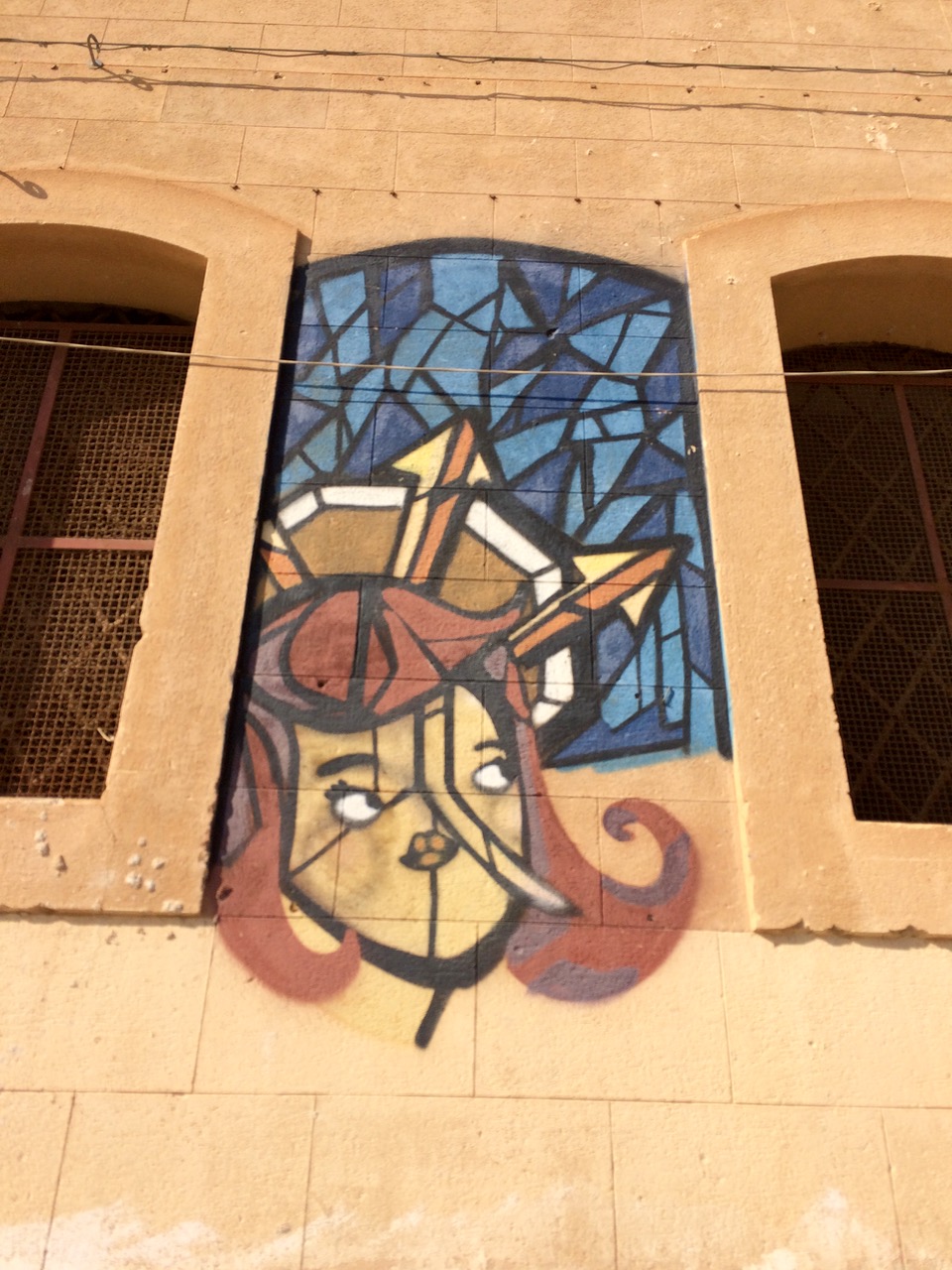 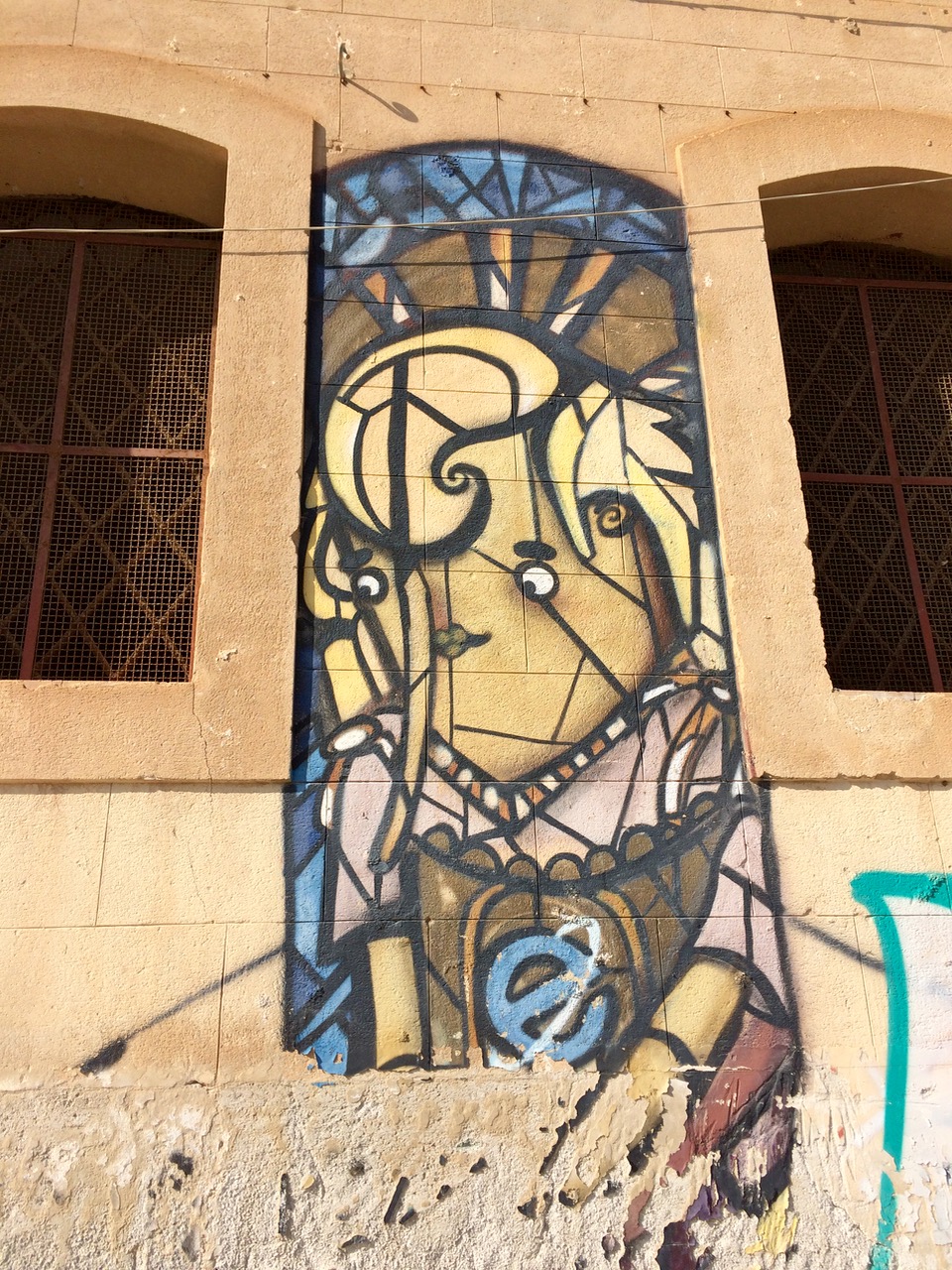 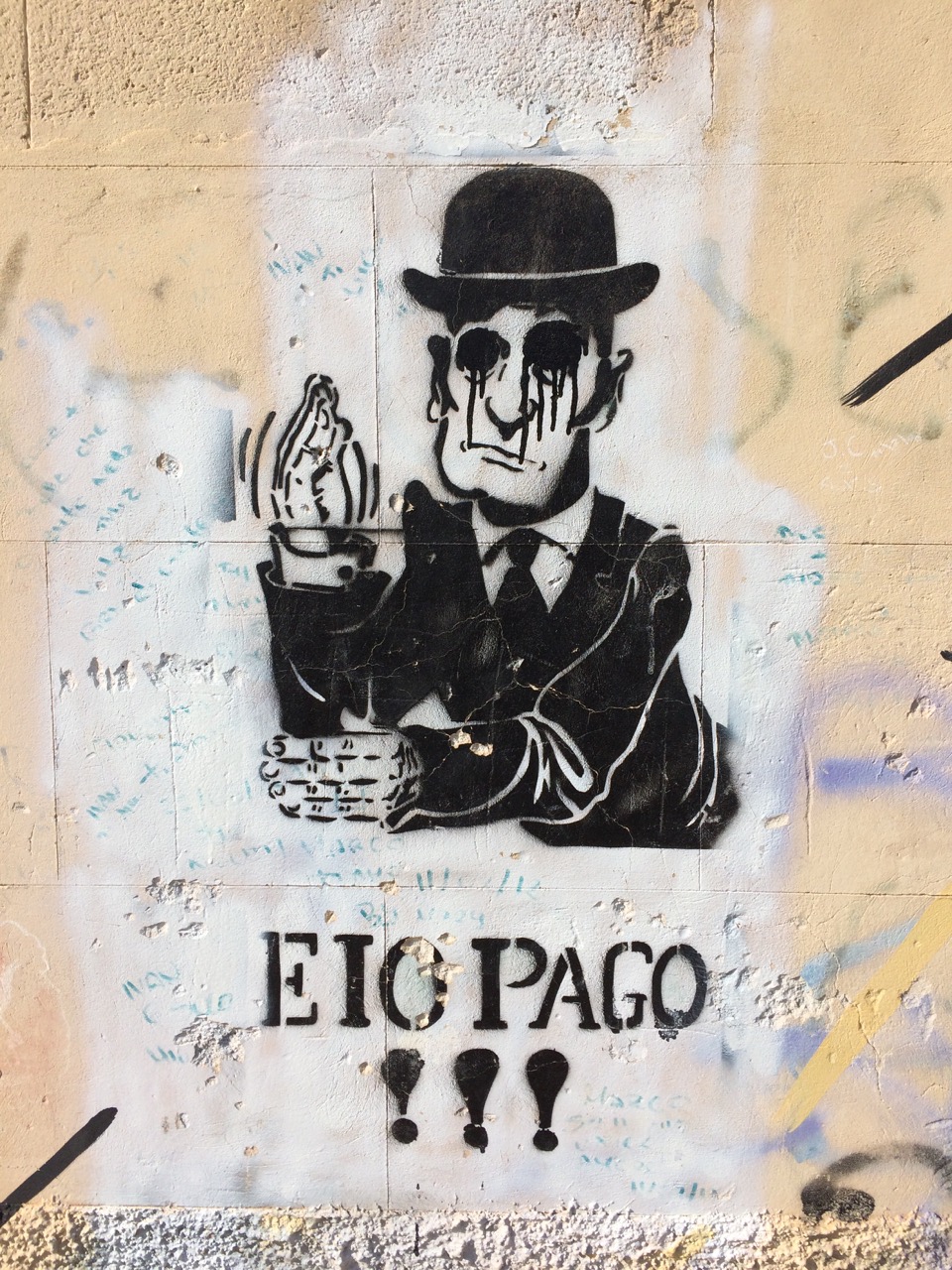 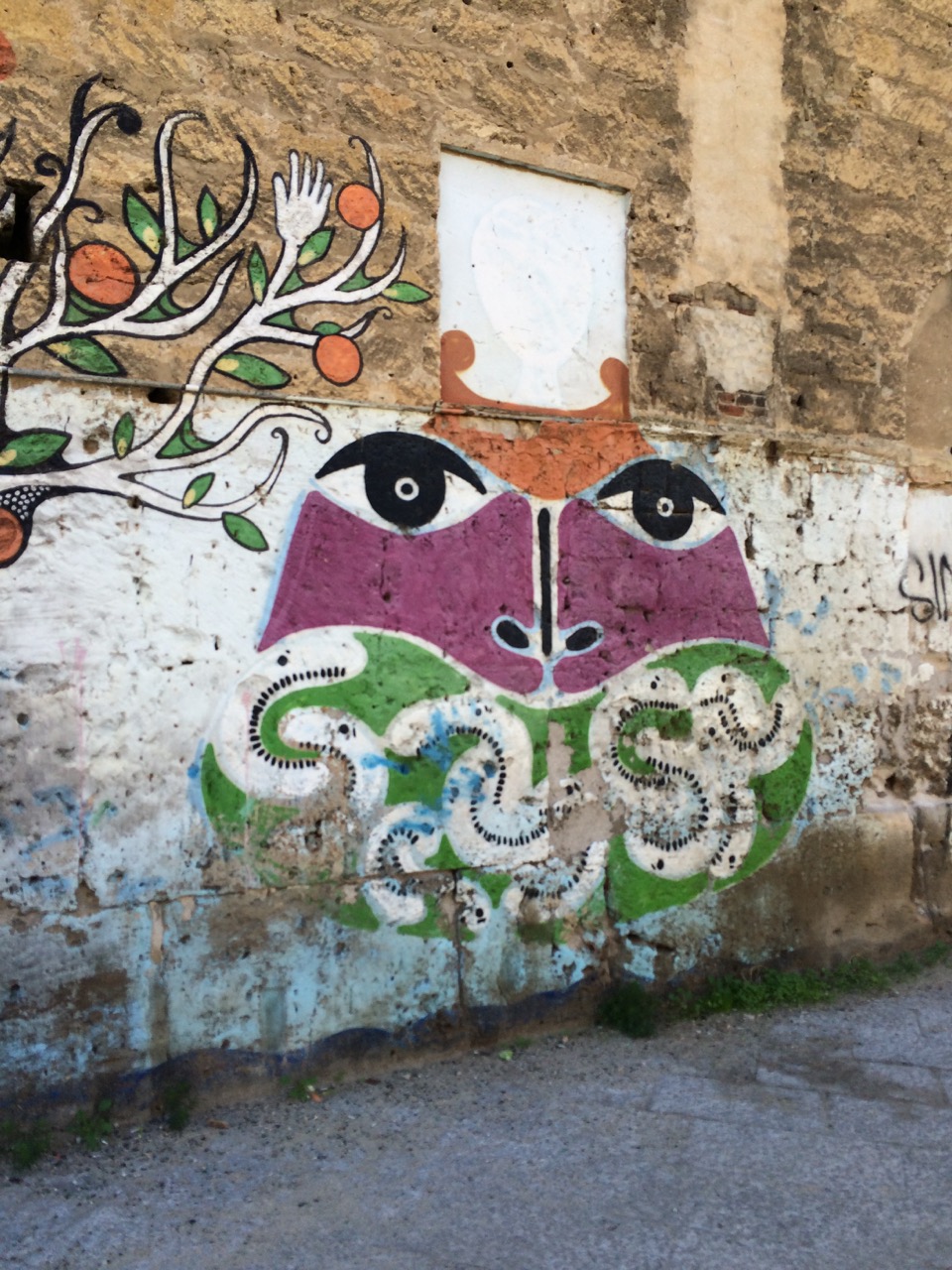 If you are interested in Street Art around the world, the articles below are for you.